Our website helps patients find clinical trials. We currently offer patient-friendly descriptions of leukemia and lymphoma trials. Early in 2018, we will be:

Didn't find a trial or need help? Contact our clinical trial specialist at 888-814-8610 or contact@ctsearchsupport.org.

Continue
Toggle
Back to Stories

Constance - Getting a transplant for sickle cell disease 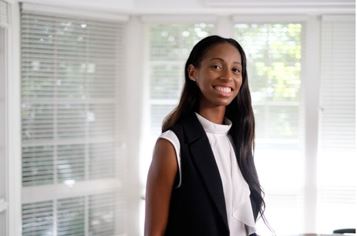 As a young adult in her early twenties, Constance was about to embark on the next stage of her modeling career. Photos of her had already appeared in Seventeen, Teen, and Cosmo Girl magazines. She was beginning to work with designers from popular reality shows such as Project Runway and Real Housewives of Atlanta.

However, the sickle cell disease (SCD) suddenly got worse and caused her modeling career to take an unexpected detour. “I tried to work through the pain, but my body just could not take it,” she says.

Instead of runways, TV sets and photo shoots, Constance was spending more and more of her time in the hospital.

“I was either hospitalized anywhere from 3 to 10 days or rushed to the ER every 30 days,” she recalls. “I had to bow out of the second half of my modeling contract because I couldn’t get healthy enough to even leave my house, let alone the state.”

All of that changed at age 25, when Constance decided to have a blood or marrow transplant (BMT). “I was afraid of getting a transplant” she recalls. Her doctor wasn’t sure if she would find a donor. She also remembers feeling worried about the possible side effects. “Everybody was afraid, but we didn’t stop” she says. Her younger sister Samantha was a perfect match, so she became Constance’s marrow donor.

Recovery was long” she remembers. She spent several months in the hospital getting care. Most of which was spent watching her favorite TV shows to deal with everything she was going through. Even after being discharged from the hospital, she had to have many tests and checkups.

Today, Constance is a healthy 29-year-old—and one of a growing number of people with SCD who have chosen to undergo a BMT, which is the only known potential cure for SCD.

Reflecting back on her time before transplant, when SCD limited her modeling career, her social life and her plans for the future, Constance says she feels thankful every day.

She adds, “My life before the transplant was sickle cell. Life on the other side is awesome. It took some time for me to realize that everything was going to be okay because I’d spent all of my life with sickle cell. I never, ever could have imagined that I would have the life I have now, that I would be able to do things I can now. Right now, I feel like I can reach for the stars. I know I have a wonderful future. I’m looking forward to it.”

If you have questions about treatment options for sickle cell disease, connect with a Clinical Trial Navigator: